Cornish College paused on Friday 23 April 2021 to commemorate Anzac Day in a special service hosted by the College Captains. To begin, Cornish Reconciliation Leader, Lily Turner, gave a powerful Acknowledgement of Country in which she recognised the important service of Aboriginal and Torres Strait Islander people in the Armed Forces. Olivia Buckley, a College Captain, then commenced the service with an explanation of the significance of Anzac Day. 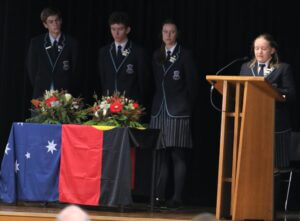 The College welcomed two special guests, Kenneth Park and Sarah Henderson. Kenneth is a lecturer, curator, historian and presenter who has conducted many guided tours in Australia and overseas, including Gallipoli. Sarah is a Melbourne-based trumpet player and a former member of the Royal New Zealand Air Force Band who has played the Last Post and The Rouse on many occasions, including at the 2014 Dawn Service in Gallipoli. 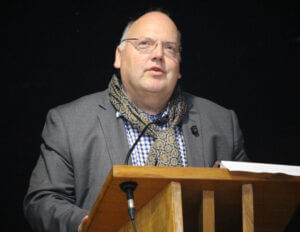 Given that 2021 is the tenth year of Cornish College, Kenneth shared ten facts about Anzac Day, including that the ANZACs were all volunteers and that, sadly, more than 11,000 of them died at Gallipoli, including James Charles Martin – the youngest known Australian to have died in World War I at only 14 years and nine months of age. Kenneth also talked about Anzac biscuits, which were traditionally eaten instead of bread and were so hard that they were known to break some soldiers’ teeth! 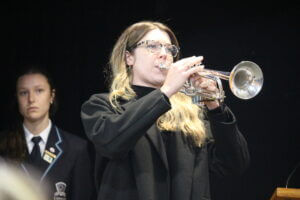 He emphasised the importance of the ANZAC spirit, which includes qualities such as endurance, ingenuity, mateship, courage, larrikinism and a good sense of humour, and how this spirit is part of what it means to be an Australian or a New Zealander. Kenneth said that everyone has a connection with the ANZAC story, from those whose ancestors fought in World War I to those who display the ANZAC spirit in everyday life, and it is important to commemorate those who gave their lives so that we might enjoy a life with more safety, security and freedom.

The College Captains laid wreaths and two of them then read For the Fallen by Lawrence Binyon and The Ode of Remembrance. The Last Post – played during war to signify the end of the day, meaning soldiers could rest – and The Rouse, followed by a benediction given by Rev Claire Dawe, were a fitting conclusion to a very moving service. Cornish students and staff also paused for a minute’s silence to reflect on all Australians and New Zealanders who made the ultimate sacrifice in wars.