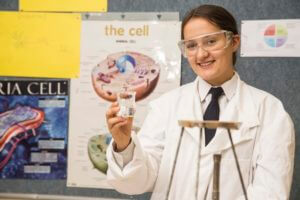 This award recognises leadership, education and technical expertise amongst students participating in FIRST’s STEM-related programs. Gemma was selected as a finalist out of 180,000 students worldwide.

Gemma’s case is particularly special, as she was nominated for both the FIRST Robotics Competition and FIRST Tech Challenge categories by her two robotics teams, Robocats and Dangerous Minds, respectively. As a finalist, she is representing herself, her teams and Australia.

Gemma and the other finalists recently met online for the FIRST Virtual Showcase – a gathering to celebrate their achievements and those of all FIRST participants globally. This showcase replaced the FIRST World Festival, which was sadly cancelled this year due to COVID-19.

The FIRST competition season has also been cancelled, so Gemma is using her spare time to design and build a robot to assist with food service in hospitals caring for infectious patients. She hopes to be able to attend the World Festival next year.

Along with her studies, Gemma has participated in several FIRST programs, including the 2018 LEGO League competition, in which she and her team won the Strategy and Innovation Award at the Nationals before competing in the Internationals in Uruguay. Gemma also founded Dangerous Minds – the only FIRST Tech Challenge team in Victoria. In 2019, she and Dangerous Minds qualified for Regionals and, along with being part of the winning alliance, they won the Inspire Award – the equivalent of a champion’s award.

Gemma has also been working on a prototype of a “self-sufficient and sustainable” fodder machine, which she presented at the 2019 Global Table Conference. During this conference, she introduced keynote speaker Dr Howard-Yana Shapiro, Chief Agricultural Officer of Mars Incorporated, and sat on a panel to discuss start-ups.

Gemma said ongoing support from her Cornish peers and teachers has been “amazing”. In the future, Gemma hopes to study at Massachusetts Institute of Technology or Caltech before starting a robotics company to “make a difference in people’s lives.”