Previous Next
Students and police compete in lifesaving carnival 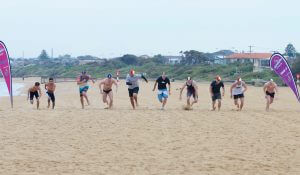 Cornish College lifted the trophy at a Police Lifesaving Carnival after receiving a special invitation to take part.

Senior Sergeant Paul Campbell organised the event, which took place on Tuesday 21 March, in conjunction with the Mordialloc Lifesaving Club. Cornish College was the only school competing against police representatives from divisions including Kingston, Bayside, Caulfield and the Investigation and Response team from the Southern Metropolitan Region.

“Not only in their sporting prowess but in the way they behaved in having fun with one another and with their encouragement, teamwork and the way they interacted with our/their police. They have left us with a very positive impression of them and their school.”

Head of Sport and Cocurricular, Mr Andrew Goodman said it was fantastic to see our students interacting with the police in a fun and positive environment.

“It was a super-friendly competition with lots of interaction and fun with police members. We had a strong team of athletes and I was delighted by the way our students were prepared to have a go at events they were unfamiliar with”, said Mr Goodman.