Previous Next
The Kerry Bolger Centre

The new Kerry Bolger Centre opened to students and teachers on 1 February, 2016.

The Centre houses six classrooms for Year 4, 5 and 6 students (two classrooms per year level), along with breakout spaces.

The building was officially opened by former Principal, Mr Kerry Bolger, on Friday 26 February, 2016. Mr Bolger was the founding Principal of Cornish College when it opened in 2012, until he retired at the end of 2015. Prior to this, Mr Bolger was Head of Cornish Campus, St Leonard’s College for over 20 years. 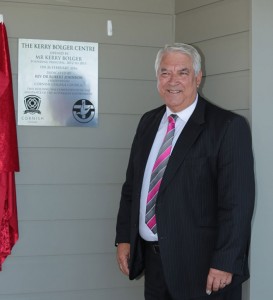 The Kerry Bolger Centre is part of a broader building improvement program.

In January 2016 new science classrooms were established and the Library (CLIC), Reception and Administration areas were also refurbished. The Parents’ Association also provided funds to replace the ovens in the Home Economics room.

Future developments will include a Senior Learning Centre for Years 10 to 12, a Middle School Wing for Years 7 to 9 and the re-development of the Arts, Drama and Music facilities.