What makes a good public speaker? Year 12 Cornish College student Tierney Khan can give you some ideas, having been named the Victorian State Champion in the Victorian Curriculum and Assessment Authority’s Plain English Speaking Awards. 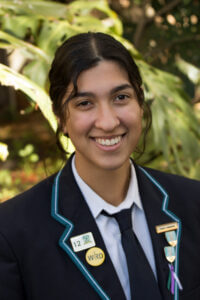 Tierney progressed through several stages of the competition, which took her from an original field of around 200 competitors down to six finalists. Judges announced Tierney as the winner after noting that the speeches in this final round were of the highest quality.

Reflecting on her success, Tierney believes it’s important to be honest, to have something meaningful to say and to genuinely care about your subject. She says the key is to get the audience to understand and empathise with what you have to say, even if they can’t directly relate to the topic. Tierney certainly achieved this in the finals, with one of the judges moved to tears with her prepared speech, ‘Not another speech about feminism’!

In addition to a prepared speech, the finalists all presented an impromptu speech on the topic ‘It’s time’. With only four minutes to prepare, each finalist presented their 2-3 minute interpretation of the topic.

A date for the National competition has yet to be announced, but Tierney has been invited to speak at The Wheeler Centre, a literary and publishing centre founded as part of Melbourne’s bid to be a UNESCO Creative City of Literature. It is renowned as a leading institution for the art of conversation, and a champion of the transformative power of informed public discussion and debate.