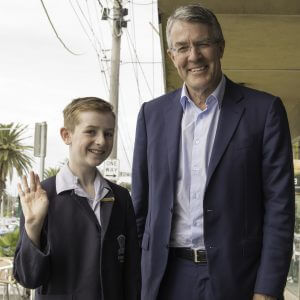 Year 6 student Samuel has had a busy start to Term 4. While most students were enjoying the last day of their school holidays, Samuel met with the Hon Mark Dreyfus QC MP to discuss important issues in the LGBTIQ+ communities.

Samuel is exploring tolerance and respect as part of the Year 6 Exhibition. The exhibition encourages students to inquire about societal issues and reflect on how they can help make a difference. Throughout the semester, students choose an issue that is important to them, thoroughly research a topic and identify problems and possible solutions to build on their entrepreneurial mindsets. They share their critical thinking and ideas for making a difference with members of the College community at an exhibition. Other topics this year include climate change, bullying, social media and screen time.

Samuel has been interested in his topic recently and, in a fantastic display of initiative, he organised an interview with Mark Dreyfus, Federal Member for Isaacs. Samuel says the interview went really well and Mr Dreyfus’s answers gave him some important context about current events, equality in Australian laws and empathy in public debate. They also discussed “what Mr Dreyfus plans to do in the future” to increase acceptance and respect for minority groups.

While Samuel will be busy writing his report and creating his display over the next few weeks, he says he is “looking forward” to including Mr Dreyfus’s insights and showcasing his findings at the exhibition. He hopes his project can help raise awareness about issues faced by some minority groups and that his research can make a difference for LGBTIQ+ communities in the future.

We look forward to seeing Samuel’s project and all of the other student projects on display at the Year 6 Exhibition on Thursday 14 November.